The whole exercise of narration of the Universe story is aimed at a greater
participation in the unfolding of the history of the Universe as it is being witnessed by the contemporary human beings. This narration helps us to see greater wisdom in the present-day events when the planet Earth is struggling to subsist in the middle of the blitzkrieg of a particular paradigm of development.
Besides the Reps from the schools of Sophia, Aradhana and Holy Spirit, the assembly had some thought-provoking presence of business establishments and volunteers. Rajee Seetharam from Sophia high school said, “We were all awed by the benign historical processes that took place in the universe last 14 billion years!”

Some of the participants and the Narrators posing with the Provincial Sr. Aquinas (behind the Earth logo)

Sr. Aquinas, the Provincial of the Holy Cross Sisters emphasized on the need for an Eco-spirituality based on rock-solid Eco-justice in our way of life. “Our humano-centric view of life is too narrow that we miss the spectacle and pageantry of the billions of years of intensive concerted action among the galaxies!”

Rupa and Jessie coming from business opined that things could be much better with the inclusive history of the universe. “This fills our hearts with a recurrent and perennial spring of hope in the apparent senseless turn of events on the business front” said Jessie Varghese.

Anand Metu, a software engineer who attended the workshop with his buddy Dhananjay promised to return to Maitreya with more of his friends for hope-filled action. On the last day their friends Mohit and Binay spent extensive time discussing ways and means to promote ecological sensitivity among their circles of software engineers. 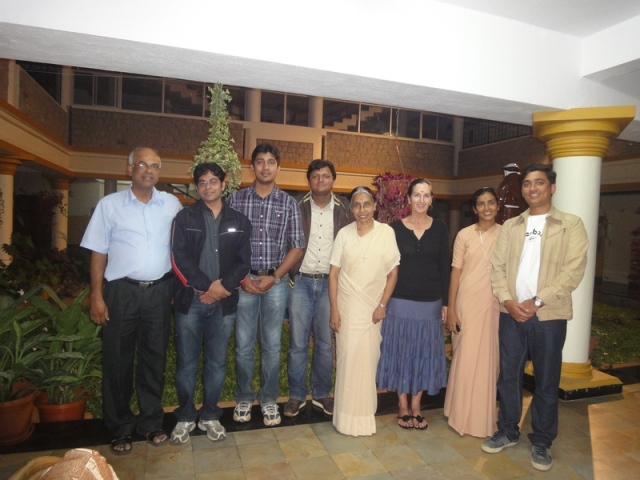 The vice-Principal of Aradhana high school, Sr. Laila Akkanath along with Jyotsna invited Dr. Orla to speak to her students and involve them in the fascinating story of the universe. Renuka Devi and Savitri from Holy Spirit high school too wanted to get their students involved.

Speaking on the occasion on the Green School Program (GSP) of Centre for Science and Environment, Delhi, Sr. Pushpalatha of Maitreya presented the Maitreya plan to reach out to the city and rural schools of Karnataka in the coming months. She showed a simple yet comprehensive way of conducting an eco-audit of the campuses. Representing the 22 year old movement of students, Tarumitra, Fr. Athickal promised to extend total support to the GSP processes.

The GSP expert Sr. Pushpalatha explaining the follow up activities in schools

The film was shown for the first time in the country and the audience unanimously stated that it was awesome! Rupa from McMillan said that the film along with the workshop gave definite directions for her life. “Many of my questions have been answered” said Rupa who is also a housewife and mother. 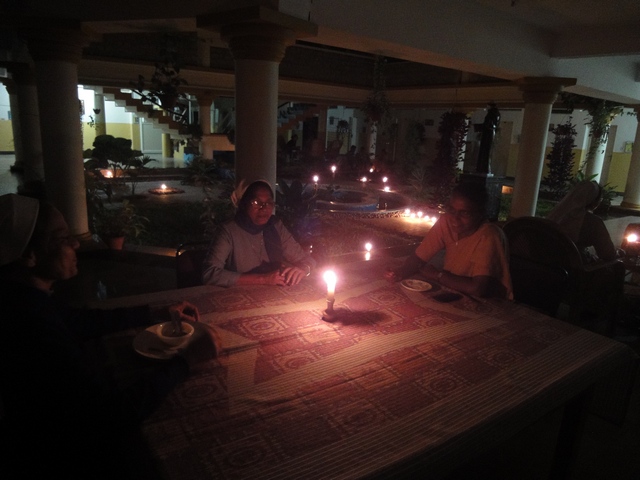 Sr. Blaise and team organized a Candle light dinner in the evening

The work shop had quite a number of touching moments of communion with the Earth and among the participants. The evening meals around flickering candle lights and meditative music turned out to be memorable for many.

The work shop was superbly co-ordinated by Srs. Blaise, Fabiola and Pushpalatha.

Present also were the volunteers from England Danielle Grayston and Adele Angus who teamed up with Dr. Orla to organize the heart-warming Cosmic Walk Meditation in the spacious dining room. 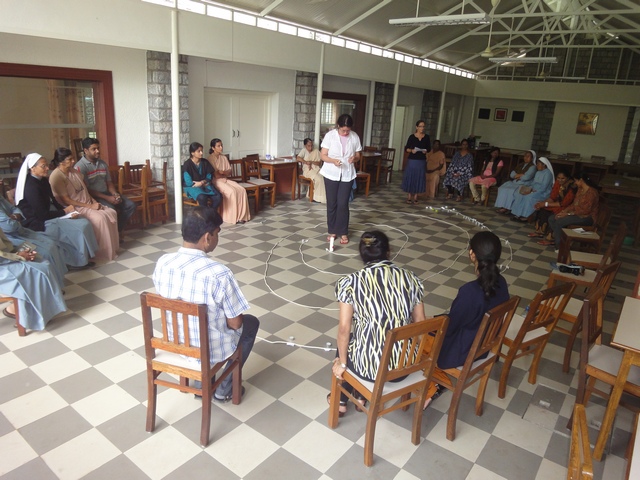